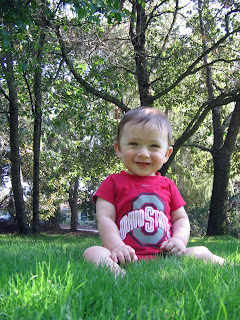 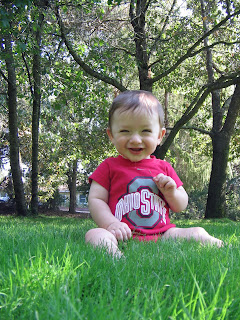 I have an eight month old baby boy.

Yes, Isaac has hit his 8 month mark. I look back at the past 8 months, even the past month alone, at how much he has changed.

He has teeth! FINALLY THANK YOU GOD. His bottom two front teeth have come in. He still has 2 eruption cysts for a few more. Here's hoping those come in soon!

I took him for his flu shot shot a while back. He didn't even cry. I distracted him by blowing in his face. Anyway, at this appointment he weighed 18 pounds 2 ounces.

And he's mobile! He is balancing on all fours and scooting backwards. Every day I expect to see him shooting forward. I have been baby proofing like crazy...and I may or may not have found Pre.cious Plan.et outlet plugs. He also sits up upsupported and tries his hardest to get into that position by himself. He's just not quite there yet.

His vocabulary has become quite vast, just not in context. He says dada, hi, mamo (I think this is mama. But it comes out maaaaamoooo), and hot. This is my fault. I sing Nelly's Hot in Herre to him when changing him. And I noticed that when I do, he says Hot, Hot, Hot! And I swear that yesterday while Ben and I were both home and he was in his jumperoo, he said "thank you" which sounded like "ank ooo." He blows all kinds of raspberries and also makes a high pitched gurgling noise, a "brrrrrrrrrrrr" of sorts. It's hard to describe. But I hear it in my head and it makes me smile. :)

He uses both hands together and independently. He will pick up things with both hands together and individually, and even something in each hand at the same time. He is trying to figure out how his toys actually work. He loves pushing buttons on things. Whenever I mix his cheerios and puffs together, he separates them out. It is so fun to watch him "work it out" in his mind. He loves animals. He loves "Handy Manny" and starts laughing when we sing the song to him, which he can totally identify. If he isn't paying attention and I start an episode for him, when the music starts he automatically turns his little head and smiles. He also loves Wh.eel of F.ortune. Yep. And I let him watch it. He loves watching the wheel spin and the letters appear. Shut up, it's educational!

We are still breastfeeding exclusively. Eight months down. I really want to make it to 12, but if we get to nine with no problems, I will be happy. At 10 months, I am going to start pumping exclusively....I think. I am just so hesitant to change things that are working for us...also for him to grow up in any way. He is eating solids like a champ. He has definate favorites in squash, peaches, avocados, and peas. He finger feeds himself banana chunks, cheerios, puffs, and yogurt melts. We have started small chicken and carrot chunks, but the texture is throwing him off. He still has his own spoon while he eats and he is sticking it into his food and eventually getting some into his mouth. We are working on the sippy cup. He definately knows what it is, but is not that adept at it yet. He is great at holding his bottle, though.

We need to work on his sleeping habits. He is still waking up at night and I just can't let him cry it out. I have excuses galore, mostly "he's teething and in pain" or "he doesn't feel good" or "we will try it this weekend when we can get more sleep." I know, I know. I just have to bite the bullet. Most times he just needs a little comforting, but others he really is hungry. I just don't know what to do. He occassionally sleeps through the night when he is really tired, but not very often. He is still sleeping in a 4-5 hours chunk when he goes down and then wakes up one or two times after that. He sometimes falls asleep soon after I pick him up, but sometimes not until he has ate a little. He doesn't want to be put down but fusses if I am holding him.

And he still hates pacifiers. Unless he picks it up himself in his playpen. Which, incidently, he doesn't like most time. He likes to be free.

He is still in 6-9 month clothes and size 2-3 diapers (god bless you, Pampers for the inbetween size). We scored alot of Rob.eez on Eb.ay. I love those! And he can't pull them off his feet like socks. But sorry, not paying $30 a pair.

He has such personality now. It becomes more and more evident every day. His preferences stand out, as well as his dislikes. It is so amazing to watch him grow into his own person but so bittersweet. I still can't bring myself to pack up the basinett. I still look at it at night and it twinges at my heart. I know I say this every month, but seriously, where the hell does the time go? 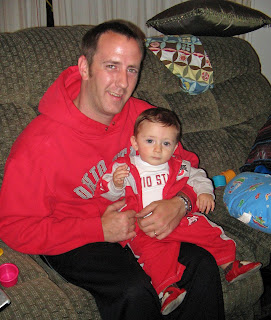 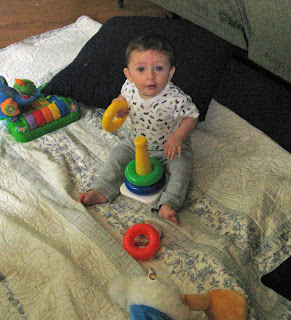 Sooo cute! His hair is really coming in too! I mean he's always had hair, but it looks like its filling in more now. Love the OSU outfit! Babies in red are the best! ;)