I am not opposed to holistic medicine. Herbal treatments, acupuncture...whatever. BUT, I don't favor it. I am not a die hard all natural, all organic, hi my name is Rain and my skirt is made of wheat type girl. I wanted a natural childbirth, but it didn't work out that way. Epidural = Love. However, for my next pregnancy (not any time soon!), I am going to try for a natural again. Bottom line, drugs are great if I need them, but other treatments are fine as well. Western medicine, Eastern medicine, whatever. If it does the job let's try it.
Isaac went to the pediatrician on Friday because he was running a little fever and pulling at his ear. Uh oh. I knew what that meant. Sure enough, he has a double ear infection, but not so severe that he needed antibiotics. I like our Dr. in that he won't pump my baby full of drugs just because. Not saying that other doctors would, but I like his approach. He told me to watch his temp, keep giving him tylenol and motrin, etc., keep his head out of the water in the bath, and if it seemed to get worse to call back on Monday and we would try some medicine then.
And then he checked Isaac's tooth situation. Or lack thereof. He felt his gums and said he feels the "bump" for the bottom ones. Any day now, but it could still be awhile. Great! :( Apparently teething can cause ear infections, because of the same nerve endings in the jaw. Poor baby.
He asked what I was giving him. And then asked if I wanted to try a Holistic (am I even spelling that word right?) teething necklace from India. He said it was over 90% effective in all the patients he had given it to, and had it on his own children. Apparently, he didn't even notice when his baby cut 4 more teeth.
I said I was desperate and I would try anything if it gave Isaac some relief and me some sleep. :)
The nurses came in and put on this: 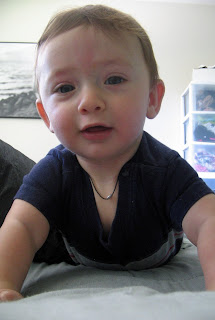 It is just a tiny little alloy bead that is threaded on a black string. Isaac hasn't even noticed it. Something about the metal and nerve endings...I don't know.
But so far, IT IS AMAZING. Isaac is in a better mood, and he isn't chomping on everything in sight. We've cut back on the teething tablets. He is sleeping better (to a degree...he still has an ear infection). I am sleeping better. He is back to only waking up once or twice a night when the pain meds wear off, as opposed to the 5-6 times a night.

I don't know how it works. Or even if it is all in my head. But I will say this much: This weekend has been way better on the teething front!
I'm a believer. He will keep it on as long as he can.
Posted by Maylily18 at 7:28 PM

Hmm, I have never heard of such teething necklace. Interesting.

Glad that it seems to be doing the trick!

Here's to some good sleep mama.

Hooray! Someone on facebook recommended that when B was teething the first time, but if tooth #2 is as dreadful as #1 then I'm definitely giving this necklace a shot!