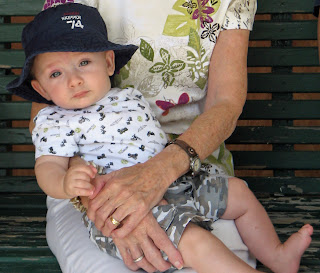 Isaac finally had his 6 month checkup and shots last Friday. The little chunker weighs in at 16lbs 5oz and measures 27 inches. That is up 4 inches from the 4 month checkup. And up 3 pounds. He's been busy, apparently. Maybe he's sneaking into the fridge for midnight snacks.
He didn't see his normal pediatrician because he was not available until the end of this month. Something about having Isaac's 6 month checkup closer to 7 months didn't quite jive with me, so the Dr. who did his circumcision saw him. It's the same office. And it was my fault for having to reschedule. I was sick. Anyway, she checked his gums and informed me that he has 2 eruption cysts that I have to watch for blood. Gross. And ooooowwwww! Poor little man. His relfexes are good and he is still ahead with his motor skills. We talked about his feeding regimen and diet. She gave the ok to start with little foods like cheerios and those little Graduate puffs (which I gave him, and it is FUN-NY) since he is doing so well.
His shots went as well as shots can be expected. There was screaming. And tears. Oh, and Isaac cried too. :( The nurse let me hold him this time at my request. Isaac HATES having his legs pinned down. I think that makes him more upset than the actual shots. Whenever that arm went across his legs, he got this look of fear on his face I couldn't stand. Holding him made it easier on him, worse for me. And potentially worse for the nurse, because it made my desire to knock her out for making my baby cry even greater. True story.

I don't understand the percentiles. Isaac is in the 25th for weight and 50th for height. BUT, infants are supposed to have doubled their birthweight by 6 months and tripled by one year? I don't get it. Doesn't make alot of sense. Oh well.

Isaac also had his 6 month photos taken. They are wonderful and I am very happy with them. The photographer did exactly what I wanted and then some. I let her take some shots that she wanted. I was happy to oblige after I had my shots. Isaac did really well for an hour and a half. Then, while laying on the hardwood shiny floor trying to reach for Sophie the giraffe and his BFF, he faceplanted and WE WERE DONE. I get a CD of all the images, and will post when I get them. LOVE THEM.
(And yes, I published TWICE IN ONE DAY!!!!! I have been slacking. :) )
Posted by Maylily18 at 1:53 PM

WOW he is getting so big! What a cutie!

I hate when Laney gets shots, but thankful that they're over quickly and she stops crying as soon as I pick her up.