Who's Afraid of the Big, Bad...Monkey?

Isaac is a pretty fearless kid. Not many things shake him up. He is very curious and inquisitive, which I love about him. When he was a smaller baby, the sound of a trash bag being shook open scared him. He would cry and look terrified by the loud noise, so we would only change the trash while he was sleeping or not in the house. Since then, he has also expressed a bit of dislike toward the loud noises of the vacuum and dustbuster, but can tolerate them as long as he watches me sweep (which isn't often thanks to our hardwood floors). He has overcome his fear of trashbags and now actually laughs when he sees the big bag flap open.

Now he has a new fear: that monkey who watches the security screens in Toy Story 3.

He isn't just disturbed by the monkey. He is actually afraid of it.

He got the movie for Christmas and he has watched it several times. On Saturday, we curled up on my bed after his bath (which is another story). He hadn't taken a nap that day, so he was pretty tired. He was ready for bed around the time the monkey comes into the movie (I won't spoil the movie for anyone and say more than that), and he didn't cry or say anything. When we put him into his bed, he layed down and said "all done monkey?" We told him yes.

He woke up yesterday morning and asked the same thing. He got the same answer. He asked the question several times mores throughout the day. I seriously believed he was asking about the monkey in a Mickey Mouse episode we had watched on Saturday as well. He is OBSESSED with Mickey and in order to appease him as to why we don't watch an episode on repeat, I often tell him that the characters are sleeping. So I figured this was what he was talking about. Before his nap we curled up on my bed again to finish up the movie. I restarted it right when the monkey comes on.

Needless to say, we switched to Mickey Mouse very quickly.

Again, when I put him into his bed for naptime, he asked the same question: "all done monkey?" I assured him the monkey was gone and he went to sleep. I was cleaning up the bathroom about an hour later when I heard him shriek in fear and start crying and screaming for me. I ran into his room, half expecting a kidnapper or something.

He was standing up in his crib, crying and immediately reach for me said through his tears "all done, monkey, all gone. All done?"

DAMN MONKEY! I am pretty sure he had a nightmare that involved the effing thing.

I calmed him down. Assured him that the monkey was not real and could not hurt him. I explained that the monkey wasn't a bad monkey, just a toy.  He asked many more times throughout the day, including right before bedtime. My husband told me this morning that he asked the same question as soon as he woke up. 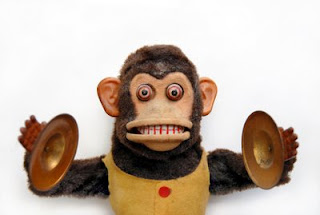 I mean, the monkey is pretty scary looking. Seriously, who makes a toy like that?
But...we will keep watching the movie. I don't want him to be scared of this monkey, so I may fast forward through those parts. Any suggestions on how to conquer this fear?
Posted by Maylily18 at 12:02 PM

Since Laney had pink eye in both eyes (involving drops) and a double ear infection (involving liquid antibiotics) and a rash (which I tried to involve liquid Benadryl per her doctor), she has been waking from her naps saying, "No medicine." When I lay her back to change her, she thinks I am laying her back to put drops in her eyes. It was so traumatizing, and she says throughout the day, "No medicine?".

This has been going on for almost a month now. I don't know how long the fear stays.

I hope Isaac will soon realize that the monkey is not real and will not hurt him :(

Leo did this yesterday about a yo gabba song "we are the tiny ugly germs" He has seen it before too. He just walked over to me trembling and buried his face in my chest. It was only later in the day when I started singing the song (mindlessly) that he got upset again. I wonder what it is that makes them have these random dislikes and fears.
My Mom told me a bunch of stories about my sister and I doing the same thing.
Sweet silly kiddos!