My baby...he's 2. 2 years old. 24 months old. ﻿My itty bitty Peanut has turned into my adorable, independent and booming Isaac Boo. How did this happen?!

We took him to Chuck E Cheese on Tuesday, since my husband was off work. He had so much fun. I notice all the differences in him...how much he was growing. He was obsessed with the tokens or "money" like he called them. He kept dumping them out and counting them. Now, he can only count to 20, so he would then count backwards to 1 again and start over. Great fun. 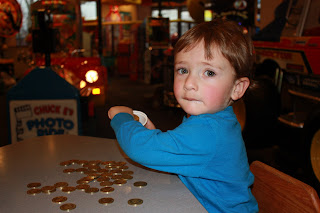 We celebrate with pizza. And big boy cups. That we may or may not still call "babas." 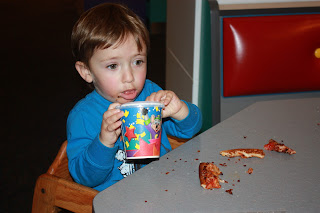 He rode the Bob the Builder forklift. He is an avid fan of driving. So when the ride actually started moving he was very excited. 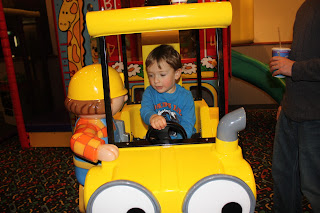 Still a huge fan of slides too. He puts his arms up over his head and squeals "weeeeeeeeeeee!" 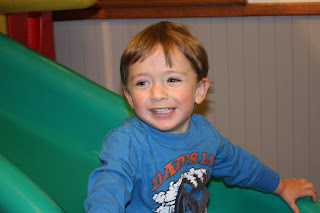 He is also a climber. And while Ben was playing skee ball, Isaac decided that he would climb up onto the game. And then run between skee ball alleys. He also liked to take the actual ball and just throw it into the holes. Which some strange kid told us was clearly cheating. He's 2, kid. And he misses half the time and the ball rolls back to us anyway. 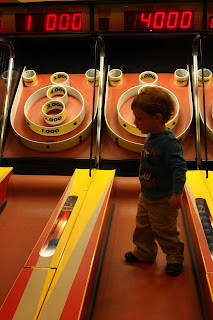 Again with the driving..... 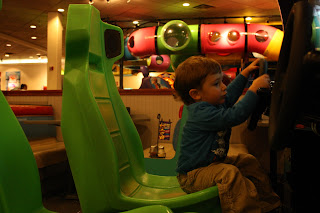 Yesterday, I took him to a cupcakery to pick out a treat for his birthday. He chose a huge cookie as big as his head. And he ate almost the whole thing. I don't blame him, it was a damn good cookie. That's my boy! 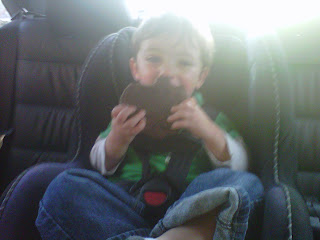 He's 2. I am having a hard time wrapping my mind around that. That this time last year, he wasn't even walking. That this time 2 years ago, I was holding a bitty baby in the hospital staring in awe at this tiny human we had created. 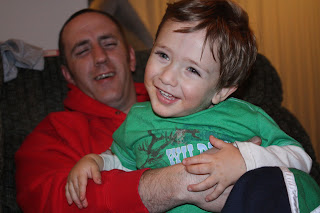 I still stare in awe. I love the person he is becoming. He's so happy. He is so full of life and so much personality. I see so much of myself in him, his fearless curiousity. His stubborn streak. His sense of humor and trying to make everyone laugh. 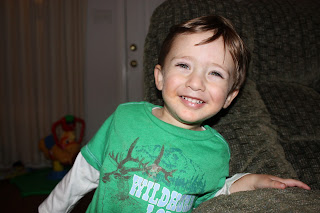 Sara, you're making me cry. What a cute little man he's grown up to be. You're a fabulous mom and I'm so lucky to be able to be part of his life. I know time flies, but at least we're having a blast while it speeds by.