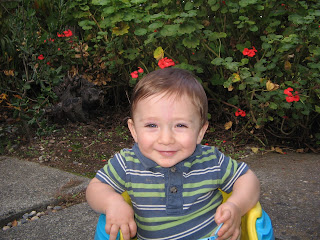 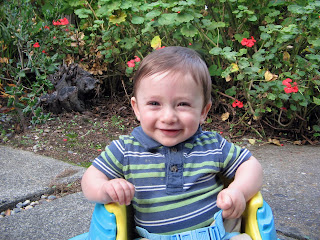 Isaac is 9 months old as of yesterday. NINE whole months! He's has come so far in the past month, the most significant change being his newfound mobility.
He's FAST. He zooms right along, and gets into all kinds of trouble. I can't contain him. I discovered that we apparently live in some kind of Dr. Suess house with crazy windows and CROOKED DOORFRAMES that no baby gate will properly fit. I gave up on that idea and now we just shut the doors. I have NO idea what we are going to do about the kitchen though...and it is one of Isaac's favorite places to zoom through. He also discovered the kitty box. Nuff said. Again, I don't know what we are going to do about that. Suggestions?
He talks up a storm. He says Dada, Hot, and Kitty cat...which comes out itty ah. It's cute. No Mama though. He gives High Fives really well and likes to bite my nose.
We gave up the bath sling. He just sits up now. Well, most of the time. He discovered he can crawl in the tub. And every morning he is sitting up in the crib. Or in the middle of the night when he is screaming.
Yes, that's right. He still does not sleep through the night. Although, since the crawling began, he is sleeping better.
He loves to take toys out of boxes. I bought him one of those jackolantern pails and he loves it. He has one of those shape sorter toys too, and all he does is take everything out. Then he cries when there is nothing left inside! He likes to babble on the phone and whack things with his hammer.
Still only has the two teeth. But the drooling has come back full force, so I am thinking the next ones are on their way. He eats all kinds of things now, most importantly meats and breakfast. And he feeds himself really well with his fingers. We are going to try some jello tonight. He loves those little mesh things that he can suck the food through. Not such a fan of scrambled eggs though.
And we are thinking he needs a hair cut soon. It's getting pretty long back there! :)
We carved his first jackolantern last night. We let him play with the innards and stem. He definately seemed more interested in the towel we used to wipe off with. :) He's an easy child to please.
A 9 month old child, but still easy to please. :) 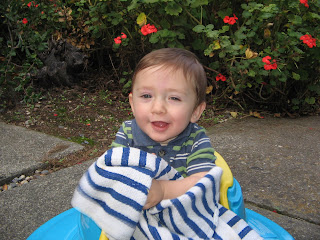 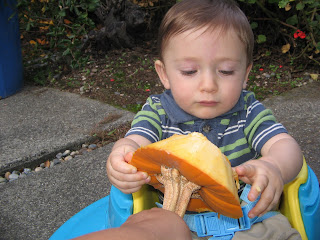 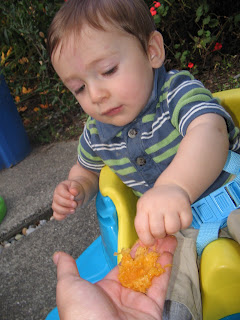 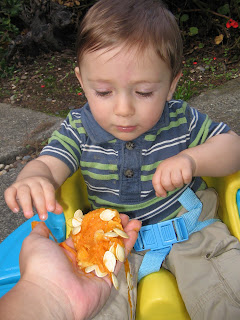 wow, he totally looks like a little boy, not a baby, that's for sure! I can't believe he's already talking a little! Gosh, time flies!

Didn't have time to read the post yet but had to see the pictures and comment on what a cute little man he is!