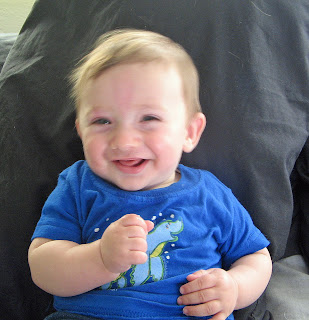 How on earth is it possible that Isaac hit 6 months yesterday?! Time is absolutely FLYING by. We took him to the zoo for the first time to celebrate, which warrants its own post to come soon.

The past month has been a big one for my little man. Still no pearly whites to speak of, but man, oh man, are they on their way! We got the clearance to give him motrin, but don't know how it works yet as a certain daddy squirted it all over his sleeper rather than in his pain-filled little mouth. I didn't want to give him more because I didn't know exactly how much actually got in his mouth. We also started the teething tablets (god send!).
He is trying desperately to pull himself into a sitting position. Thanks to our boppy, he is able to sit up pretty well on his own once he is put in that position. He rolls, rolls, ROLLS, but still not in a complete 360 degrees back to back or belly to belly. 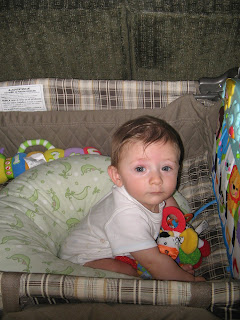 Still loves the PP piano, especially now he can play it with his little hands. He loves it so much that I bought him a new little FP rainforest xylophone that he spins to make chimes. LOVES IT. He grabs at toys he likes, and has clear favorites now.

Due to his solid foods, he is becoming a little chunker. :) We have introduced green beans, carrots, avacado, golden beets, bananas, applesauce, sweet potatoes, squash, peas, and plums. He will drink water from time as well, and has moved to a schedule of three meals a day with snacks in between. The little chunker is still in 3-6 month clothes and I think we have about another month in them.

He is not sleeping through the night, but we have moved him back into the crib. He gets a little scared when he wakes up in the crib, and won't go back down in it after eating. This could partly be my fault since I don't wait very long after he falls asleep to put him in. I am trying, but it's hard. I am so tired, and I really love having him sleep with me. I love the cuddles.

My favorite first, by far, happened this Friday night. Ben was holding Isaac and I held out my arms to him....and he REACHED for me!!!! I was so happy, I cried. And then we did it about 4 times after that. The next night he did it again, and then yesterday morning reached for daddy. It gives me so much joy and validation that he wants to be with me. And I am so proud of him for learning this method of communicating what he wants.

And then there is bathtime....what to say but, we have a tsunami splasher on our hands. And he thinks it's hilarious! Ben and I both get drenched when we give him a bath. He's learned to splash with his hands and after we have gotten all clean, we will let him sit up and splash for a bit. 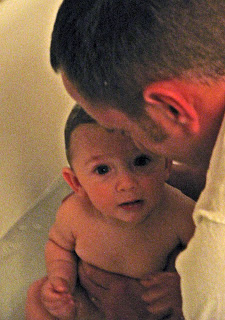 Six Months. Half a year. Wow.

Six months will be six years before you know it - time never slows down for moms-on-the-go. But he sure is a cutie!

They are turning into big boys so fast! Have you tried putting him in his crib just before he falls asleep instead of after he has already fallen asleep? I've found that there is a window of opportunity with Tommy and if I put him in too early or too late it makes it really a challenge. But if I get it just right- he turns his head a few times and falls right to sleep.