Yes, yes...I am a week late with this Christmas recap, but seriously. Show of hands of people who weren't busy as all heck in the past week? Anyone? Bueller? Bueller?

Anyway, Christmas Eve started for Isaac by reading "The Night Before Christmas" recorded book that Ben and I made for him. He turned the pages and listened to our voices. I think he was a little confused by hearing our voices with us sitting right there with him, not talking. He was all decked out in his Christmas jammies. He went to bed, normal time, normal 5 minutes (yes, we are down to 5, count em, 5!) minutes of fussing. And then Santa elves went to work. 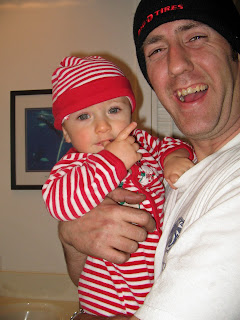 The plan was not to buy him too much this year. And then I discovered peek a blocks on E.bay. In all fairness, I stayed within our set budget for him. 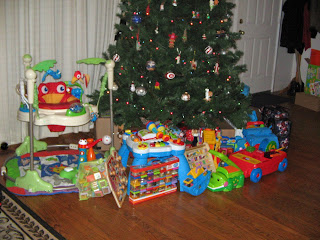 There were even presents in "Santa paper." You can't really see them in this picture, because they are buried beneath all the other toys. Oh, the jumperoo is old. We've had that. It just got in the way of all the toys.
Exhausted and lysoled out, we called it a night. (PS. mental note to stock pile every single size battery for the rest of Isaac's life...or at least until he is old enough to understand patience.)
And then...there was a poo explosion. An explosion that drenched the cleverly selected Christmas sleeper. Sigh. A change was necessary.
I had prepared a bottle for Isaac to tide him over, so his initial waking thought would not be "food" and we could focus on the masses of toys under the tree before eating breakfast. I had not prepared for the poo explosion. Ah, well. He had his pj change, and his bottle.
And then it was time for presents! :) 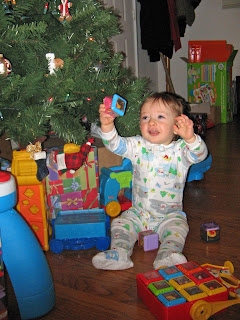 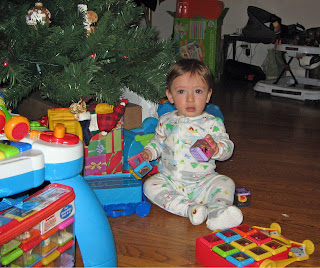 I think he was a wee bit overwhelmed. But he got the hang of it. He played, and played, and played. He finally crashed and slept like a rock for a good 2 hours.
He webcammed it up for his grandparents. He even looked the part. :) 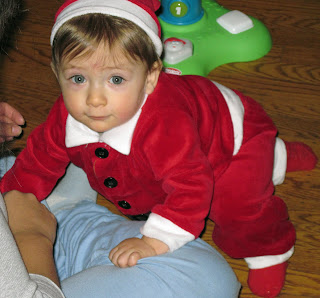 He ate his Christmas feast of ham and sweet potatoes, and mooched off Mommy's plate for some mashed potatoes and cookies. 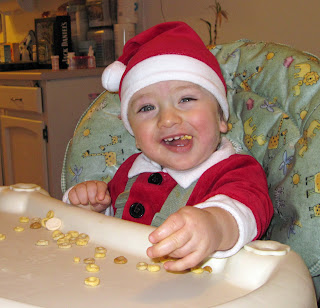 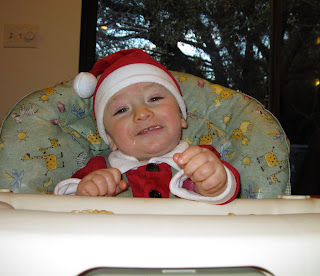 The day was everything I could have wanted for a first Christmas. We were low-key and together as a family. We got to enjoy our baby and our time. 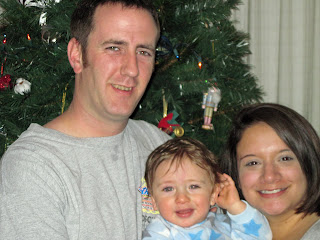 awesome photos! looks like the whole family had a beautiful Christmas, your tree looks great, especially with all these baby presents underneath :) fun fun :)
Happy New Year!