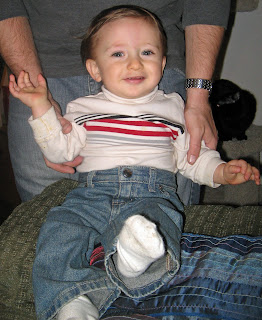 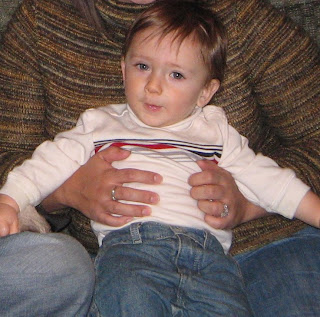 I think this past month was my favorite, simply because Isaac learned to say "Mama."
And he crawls up to me know and gets up on his knees, stretches up his arms, and makes the "uh! uh!" noise, asking to be picked up.
My next favorite thing that developed this month was that he crawls into my lap and snuggles with me.
He has come really far this past month, especially in terms of mobility. He zooms aroudn in his walker, and he is working on pulling himself to standing. He is also able to sit up from a laying down position without rolling onto his side or tummy, like a sit up.
We discovered last week that he no longer likes to be fed. He only wants to feed himself. It has been kinda fun, because now he is eating more of what we are, and it makes my life easier. He loooooooves cheese. He finally figured out the sippy cup as well. :)
Still not sleeping through the night. :( sigh. And he's pushing bed time later and later, and nap times less and less. I guess that is probably good because our nap in the swing days are numbered as he packs on the pounds!
6 teeth!
He loves Handy Manny. He laughs when the songs come on and will turn his head to see it when he hears it come on. And no joke, he's a big Kel.ly Clark.son fan. He sings along with the radio. He watches Buck.eye football with his dad, and seems to enjoy it.
We have whole conversations now and I love it.
He figured out how to fool me by pretending he put something in his mouth, chewing and watching me dive across the floor and swipe into his mouth only to find nothing. He laughs and laughs.
Yep, my baby boy is growing up. But he will always be my little Peanut. :) 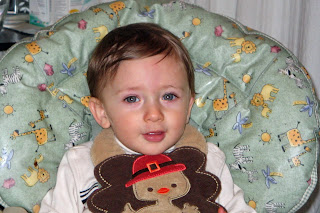 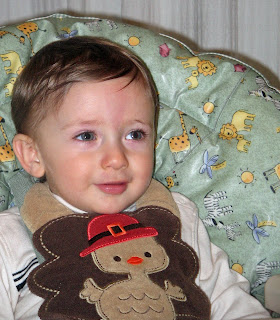 He's so handsome! I love his hair. :-) And his Thanksgiving bib is so cute!

Hey is SUCH a pretty boy Sara! Darling!!