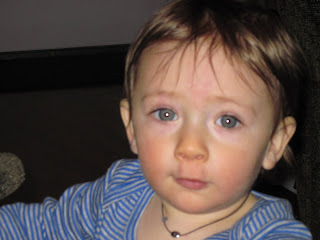 Time has flown by so fast and with the passing, it took Isaac's eleven month milestone marker, the day after Christmas.
My little boy is zooming all over the house, and is never happy in the playpen anymore. He started standing up and walking along the furniture, but he is still a little tentative in doing so. We have baby proofed galore in our house. He chases the cats and has learned to "pet them nice." 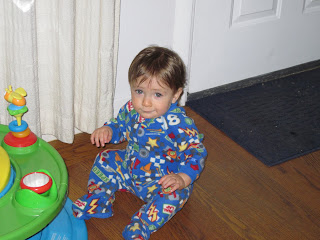 Isaac's vocabulary has built way up over the past month. He says "uh oh" and "eat" in proper context. He says Iiiiiiiiiiiii dit, for his name. I also hear "dat," "wuv" and "yay!" If you asks him what the monkey says and go "oooohhh oh ah ah" he will repeat it back. :) When he catches the ball or does something we like and we say yay! he will throw his arms in the air and say it back.
I love his smile. He smiles and laughs all the time. If you say no to him he will shake his head. 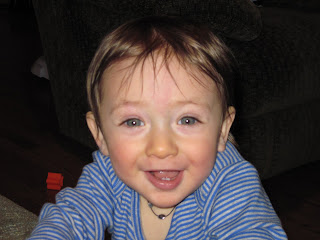 And thank you, thank you, thank you, lord HE IS GOING TO SLEEP AT 8 EVERY NIGHT BY HIMSELF AND SLEEPING UNTIL A LEAST 7 EVERY MORNING. Sometimes I get really lucky and he'll sleep until 9. :) We are starting the cry it out for nap time now. I moved his big fluffly blue bunny into his crib and he loves to cuddle with it. And he is a mover in his sleep. If he falls asleep with me during the day, he wakes up as soon as he wants to move and is constricted by my body. He needs his space. 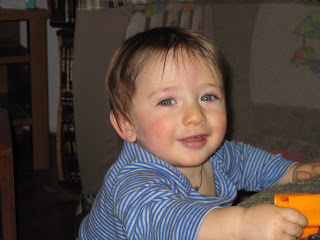 He loooooooves to feed himself. Chunks of sweet potato, carrots, and pancakes are his favorites. He is getting very good at the sippy cup (he may have learned sooner if I had realized there was a safety plug in them....) and we started on milk. He loves it. He has 4 oz a day and so far so good.
He loves to push buttons. And he loves to put his cookies throught he slot into his milk jug, which according to our Familes Fi.rst nurse, indicates his aptitude for math. We'll see. :) We also discovered "Word World" on PBS. Have you seen that show. I love it! It's genius! I would love to be an illustrator for that show.
I can't believe I am planning his first birthday celebrations already. It blows my mind.
Posted by Maylily18 at 9:59 AM