The Lahman Family Disney Movie, Complete With Birds and Cheezits.

When I got home from work on Monday, I wasn't even out of the car before I knew something was up. Isaac was in the yard playing with BIL and Dozer, and Ben was doing something (I don't even care what it was. He is always do SOMETHING to one of the cars and I tend to block it out) to his car. As soon as I got out of the car, Isaac started with his "Mama! Hi Mama! Mama!" running toward me and pointing. Not far behind him was Dozer and not far behind him was BIL who said "So, you have a new pet bird."
Um....WHAT?!
He pointed up into the tree right above where I was standing. Sure enough, there was a little bird. A little bird who had apparently been friendly with them all afternoon. 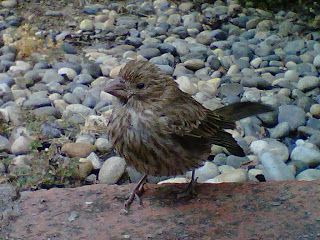 This bird, let me tell you, was like, straight out of a Disney movie. It followed us aroudn the yard, sat on our shoulders and arms, ate food out of our hands, and even let Isaac touch him. I half expected a show of other woodland creatures to emerge in song. Seriously, when we moved in the yard, he moved with us.
And I guess I was the only one with any concern for the bird. My husband and BIL apparently thought that all birds were supposed to behave in this fashion. My first thought to be perfectly honest (and morbid) was that someone had died and was visiting us in the form of a Disney bird. Seriously. My mind went there.
My rationale thought was that it was a baby bird, a big baby bird, but still a baby, who didn't know better. I suggested we call wildlife rescue. I think my husband laughed at me. LAUGHED. I was all "Um...who has the advanced Biology degree and animal husbandry training in this family?" This bird was NOT NORMAL. How many times do I need to reiterate this? Normal birds don't behave like this! I ended up calling a coworker who has quite a hand in the wildlife rescue field. Upon sending him a cell phone picture, he confirmed it was a finch fledgling that was undoubtedly a little begger and most likely his mama had been watching him in a panic fo rthe past few hours waiting for him to be left alone so she could take him away.
I ushered everyone inside and closed the door just before the little bird flew into the house. 5 minutes later the bird was gone.
And in the 5 minutes it took for the bird to go away, I learned that my baby bird HAD NOT EATEN ANYTHING BUT CHEEZITS since I gave him breakfast of french toast sticks and banana before leaving for work. 9 hours. Nothing but CHEEZITS. My husband said when he got home from dropping off the car (see above annoyance about his obssessions), Isaac was tired and cranky. However, upon putting him down for his nap, he wouldn't sleep. So Ben got him up and discovered said Disney bird.
HE DIDN'T SLEEP BECAUSE HE WAS STARVING!!!!!!!!!!! I am so glad he was able to feed a bird but not his son.
After continuous wifely scolding and shaming, Isaac had 2 dinners that night. Oh you know what makes it even better? I had previously scolded Ben about feeding Isaac happy meals all the time. He claimed he didn't know what to give him so I wrote out a menu of options.
The next day I called after lunchtime and asked if Isaac had eaten. I got this response : Why are you checking in on me? Do you think I can't take care of my own son?
Um, YES! When my son has not had anything to eat in the 9 hours I leave him with you except for CHEEZITS, that is EXACTLY what I think.
Le sigh. Here's hoping this Disney movie doesn't have a sequel.
Posted by Maylily18 at 3:58 PM

Labels: baby, get it done, husband

Poor Isaac. Although, I would like him to stay small. Could you consider feeding him less? :)

beautiful blog..pls visit mine and be a follower.. thanks and God bless..