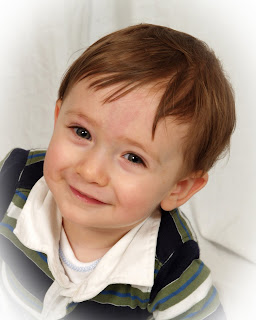 One year has given Isaac boundless amounts of energy and vigor. Yesterday, we went to Sea.rs Por.trait S.tudio for his one year photos. Was it just me, or were his 6 month photos way easier? Probably, because he wasn't really moving around then, he'd just learned to sit up. Regardless, this session was messy.
No kidding, I broke a sweat under all the lights, trying to wrangle my little wiggle worm into sitting still for one shot. He figured out that the back drop would bounce him back if he leaned back into it, similar to our lazyboy chair. That is all he wanted to do in the beginning. And then he would not stop MOVING. Even enticing him with cookies, did not work.
When all was said and done, we did get some great shots and I am really happy with the package we ordered. Still, is it wrong that I am almost excited for the day when the school takes the yearly photos? This kid has limitless energy. He doesn't tire easily. I wish I could borrow some of that energy!
The 1 year Dr. appt went well. Isaac weighed in at 21 lbs. 2 oz, and measured 30 1/4 inches. HIs still in the lower percentiles. We definately have a little guy on our hands. He got his chicken pox vaccine (yes, I decided to do it) and his first polio shot. The Dr. said he is still right on track with his development, and was impressed but his ability to spout off sentences, like "Daddy did it."
As I write this, Isaac sits in his highchair, chomping on his grilled ham and cheese sandwich and peas, and seeming to be plotting how to detach the Handy Manny balloon from the chair, leftover from last week. I know its redundant, and every mother says it time and time again, but I still sit here and marvel at how much he's changed and how proud of him I am. :) I am amazed as I watch him use his energy and enthusiasm to figure out his world. I am stunned by how quickly he picks things up and remembers, and how he expresses obvious disinterest in others. I watch him make messes and enjoyo every single minute of it, and although I am annoyed at cleaning it time and time again, I still let him do it, because he is so happy.
We named him appropriately. :)
Posted by Maylily18 at 11:53 AM

I love the picture! I'm enjoying the fact that Evan can't move while I still can! lol

That's amazing that he is talking so well! Go, Isaac! His name means laughter, right? I'm glad it fits him. :-)