My son got three, count em, THREE first birthday celebrations. In retrospect, this was extreme overkill, I know. And I know he won't remember a lick of what he did for him. Regardless, it meant something to us to have our baby surrounded by people who love and care about him on his special day(s). And we have already decided that the best day was his actual birthday (at least logistic and $$$ wise) and he only gets big celebrations at 5 and 10 years.

For Isaac's actual first birthday, Ben and I took him to Mon.terey Ba.y Aq.uarium. It's quite a haul, so we had to stay in a hotel overnight and go to the aquarium the next day. He absolutely loved it. He had a blast watching the fish and pressing his little hands up against the glass trying to grab them. The aquarium has amazing exhibits, including a well thought-out toddler area that had a huge wave simulator (similar to a waterbed) that Isaac played on for about 20 minutes. It also had water he could splash his hands in and blocks to play with in a room surrounded by fish tanks. There was a huge tunnel he could crawl through, which he also liked, and that Mommy braved with him. It is possible that Mommy may have been scolded for talking in "educational terms" at various exhibits, throwing out lines about regeneration, niches, sequential hermaphrodism (oh yes, I did!), and ebb and flow. During the wave simulator fun, I may or may not have thrown in words like peak and trough. Jury is still out on that. :) I stand on that you are never too young to learn...
After the aquarium, we took him to Bub.ba Gum.ps and he had his first kids meal supplemented with carrots and sweet potatoes. :) He loved the jello and that Daddy wore a lobster bib similar to his Bibster! And man, did the day tire him OUT. He made it through the entire aquarium, which was about 3 hours of fish-filled fun, and another hour in the restuarant. As soon as he was in the carseat for the drive home, he was out like a light. I don't even think we made it out of the parking garage before he was snoozing.
It was the perfect way to spend his birthday. It was great to have time just me, Ben, and Isaac and to spend his first birthday as a family. 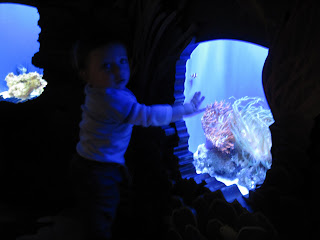 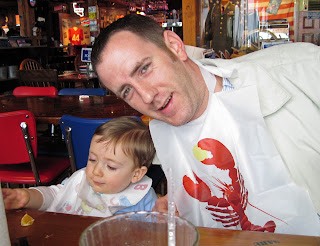 The second birthday celebration was his Handy Manny themed birthday party here in California involving our friends. Isaac has many fans. :) It ended up being a really nice time for everyone. My friends came from all over the Ba.y A.rea and D made him a cupcake tower. He tore up his cupcake, believe you me! During this party, we discovered that Isaac loves to have people sing "Happy Birthday ." He laughed and laughed, and clapped his little pudgy hands (Sorry, kiddo, but you gots some pudge!). Ben was a little overwhelmed (to say the least) by the number of small children at our house and I am pretty sure I will be doing the birthday party thing solo for a while (going to other people's parties, I mean). Isaac got some nice gifts and it was fun to see him play with the other babies. He's around other kids all the time at daycare, but these where around his age. He's a social baby! :) 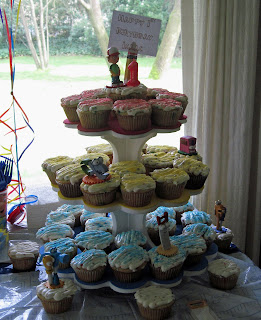 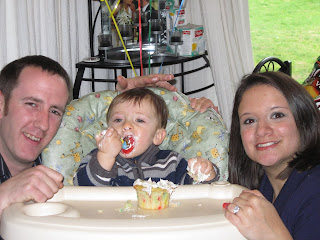 The third and final celebration involved the long trek back to Ohio. We flew Southwe.st, and thank the lord we did. He got our own row every flight and it was needed. Isaac is just not at a good flying age. He doesn't like to sit still and his attention span is very limited. Daddy did teach him to look out the window and say "ooooooooh!" which was amusing. 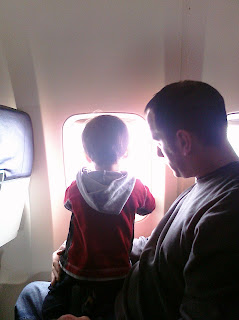 This party was pirate themed. And the cake was a family effort and it was AWESOME! I had a very specific picture in my head of what I wanted the cake to look like, and it came out perfectly. We only had to purchase the sheet cakes. 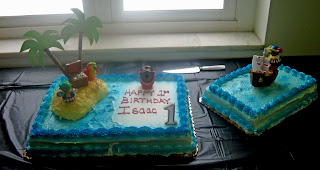 Isaac was surrounded by his family. And I really can't describe how wonderful that was for him. He had so much fun and he (like his mommy) loves to be the center of attention. Everyone signed a big card for him that will go in his memory chest. I know that being so far away from so many people that love and care about Isaac and us is hard on everyone, and it is difficult to miss these milestones in our lives. He was completely disinterested in presents. However, once we got started, he entertained everyone with his "oooooooh" ing. :) Love my baby! 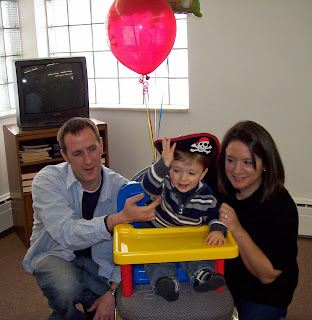 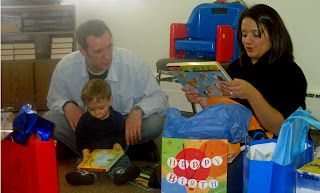 So the first birthday festivities have come to their close. It was a seriously big deal, so much in fact that it almost warranted opening and closing ceremonies, similar to the Olympics. It is very bittersweet for us. I am glad the mayhem is over, but sad that my baby has passed another milestone and is racing toward the next. He's so big now, and such a little man.

It truly has been the best year of our lives in so many ways.

Tommy also loved Happy Birthday to You! He laughed and smiled so big- he totally understood that we were celebrating him. So cute!

Happy 1st Birthday, Isaac!
Wow, what a milestone! I love all the photos from the parties, we'll probably end up having more than one too as everyone wants to be involved. :) Our kids are getting so big, my God, time flies!