I figured Isaac needed to get started early in embracing his inner environmental geek side. This past weekend, a co-worker and I participated in the first annual Lagun.a de Sa.nta Ro.sa TreeAThon, helping to plant over 850 Valley Oak trees, shrubs, and rose bushes to ecologically restore parts of the Laguna. And of course, Isaac came along. 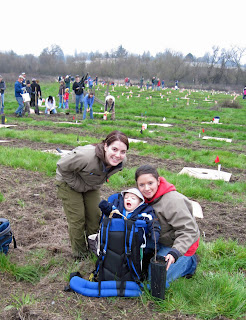 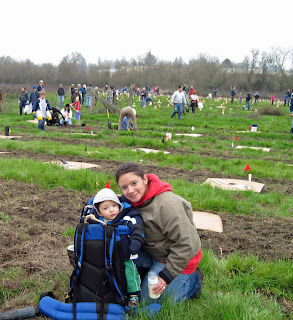 I was a little worried about how he would do, outside, in the chilly air, for the entire morning. He was fascinated. I borrowed a baby back pack carrier from another coworker, so he rested on the ground most of the time, in his puffy coat and 40 layers of clothing. He likes people watching, and there was alot of movement around him. 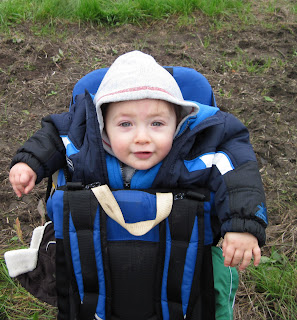 We did great until someone knocked him over, or he tipped himself over. I, personally, would like to believe he knocked himself over because you would think that if someone knocked over a baby, they would have the common decency to be embarrassed and apologize ten million times, or at least once, which no one did. I heard him cry and looked up from planting to see him face down in the grass. No worries, he was easily calmed by the puppy that was there. However, after that, he was DONE with tree planting. We went back to the parking lot and waited for everyone else to get back.
In the meantime, we played with his mittens. He was fascinated by them. It's like he couldn't figure out where his fingers were, but he could still feel them. :) And he had fun clapping his hands together in them. 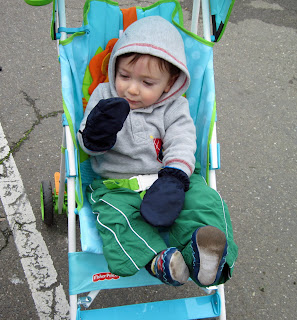 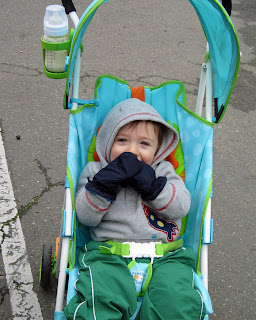 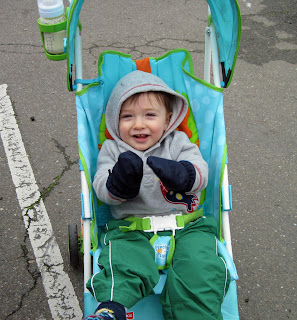 When we got home, we were both pretty tuckered out. We crashed together on my bed for about 2 and a half hours. He always sleeps better cuddled next to Mommy. :)

Oh, and my coworker and I raised over $1000 in pledges for the TreeAThon! We raised the most money in the "team/couple" category and will get a VIP Laguna tour and Winemaker dinner and tour at a local vineyard. :) However, Isaac will not be attending those things. ;)
Posted by Maylily18 at 12:28 PM