For his first Easter, my MIL gave Isaac a big blue bunny. At the time, this bunny was bigger than he was. We gave it to him right away, but he wasn't really interested in it too much besides to chew on it occassionally and to feel the silky fur. We put it into his crib, which he wasn't sleeping in, and it occassionally moved around his room, before ending up back in his crib permanently. 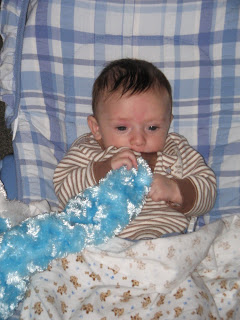 Now? He loves it. I mean, he looooooooooooooooooooooooooooooooves it. Loves it so much that for months it had a hole in the back from where he had pulled on it repeatedly. Once he got big enough, while he was "supposed" to be sleeping or when he woke up and was waiting to get up, he would yank the stuffing out of the hole and toss it all over the floor aroudn his crib. Oh, the bunny massacres we saw. Last week I finally put more stuffing in and stitched him up. Perfect timing.

Isaac wants the bunny to go EVERYWHERE. He shows me "bun-neee" every morning when I get him up. He cuddles him immediately when he lays down. The pillow in his crib is pointless. He only wants to lay on the blue bunny. And more often than not, bunny has to follow us to breakfast and sits ontop of another chair to watch mickey mouse with him while I get ready. He drags bunny around by his long ears or holds him tight around the middle and toddles around haphazardly because the bunny is still about as long as he is. 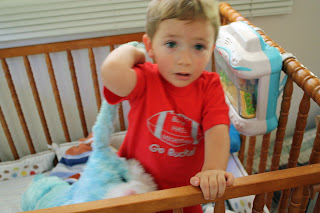 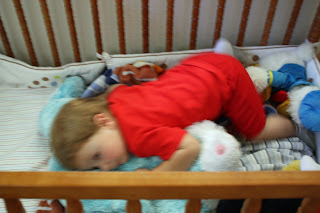 Sweetly, sometimes "bun-nee" comes out as "bud-deee." This led us to refer to blue bunny as Bunny Buddy.
Posted by Maylily18 at 2:37 PM

That is so cute! Isaac is getting so big :)

Laney doesn't have any one thing that she's attached to besides her pacifier.

Really adorable! I was certain my daughter would be attached to a stuffed animal. I was when I was little and they were 2 stuffed bears (one even had it's own Christmas stocking) but she could care less about the several stuffed animals she has.

Instead she's attached to her blankies. I decided to splurge and bought some Aden & Anais blankets around her first b-day. She doesn't need a particular one but it has to be one of those blankets. She could care less about the cheaper blankets I stocked up on when she was a newborn. At 17 months old she already has expensive taste. ;)